9iNNOVATE is a project-orientated activity for students in Year 9, designed to complement the academic curriculum and align with Ecolint’s mission statement to ‘prepare students for membership of communities that are socially and culturally diverse, for citizenship, and for engagement with the political, ethical and environmental challenges of their times’.

Building on from introductory experiences of community action from the Year 6 PYP exhibitions and the Year 8 SDG project, 9iNNOVATE is the next step in La Châtaigneraie’s developmental Character Programme.

In Year 8, all students engaged in a group exploration of an area of interest linked to the United Nations' Sustainable Development Goals. The 9iNNOVATE activity now challenges students' innovation and collaboration skills through action. Students will choose one of the SDG themes and in groups of six will work to design a local solution to a global issue, over a 3-month period in collaboration with an expert from a Geneva-based NGO or agency. The project aims at local impact and will be summarized in a 'TEDx' type presentation in June whereby teams will present their solution and its impact to a panel who will comment on its merits.

The wider implications of the implementation of technology for innovation.

Challenge: Of all the technological innovations that have emerged in recent years, UAV’s (unmanned aerial vehicles) or drones, are probably one of the most well-known and exciting. Regrettably, much of the publicity surrounding the machines to date has focused primarily on their military applications ignoring the numerous other ways drones are being adapted to benefit society. How will drones positively impact life on land on a global scale? Can you investigate their social, environmental and economic impact? What are the legal implications of their widening use?

Local Action: Can you think of some innovative ways in which you can put drones to use in the local community? For example; Can you use a drone to produce an aerial map or virtual tour of the school? Can you send a drone up during PE class to record students demonstrating a particular play? Have students watch the footage and discuss where they should have been and what they can do better. Can you produce a promotional video of the surrounding area (e.g the Jura mountains?) What do you need to do?

Global Issue: Summarise / define the issue State what will happen if the problem is not addressed (include statistics / pictures) = display work around school on your assigned noticeboard. Explain / suggest global approaches for tackling the problem

Local Action: Brainstorm ways in which you can address the global issue, locally. Agree on one solution and put it into action. Documenting your journey: You will be required to document your journey, from outlining the global issue in detail to describing your local solution

TEDx Presentation: At the end of your 2 month ‘journey’ you will be required to present your ‘local solution’ to the ‘global problem’ posed by the expert you have been assigned to. Your presentation will last no longer than 8 minutes max. You will need to demonstrate: Your understanding of the global issue What will happen if it is not addressed What YOU have done / help others to do about it in their own community (i.e. local action) Evidence (by means of a prototype / display etc) 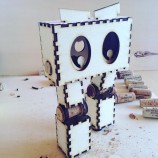 > Existing concepts. Create a moodboard of existing concepts worldwide. Like a Pinterest overview  - try to cluster them, put them in groups if appropriate

> Brand. Try different names and logos for our concept - What product do we need to invent? How do we have to adapt the existing drones? (Zacchaeus Poulsen & ...)

> Advertising. Create an advertising for the services we offer.

> Presentation. Assembling all previous in the powerpoint  (Sarah Issa)

Just a few years back, you would never have heard the term “drone” with a very positive connotation. Whenever there was any talk of drones, you thought of wars, attacks on terrorists, and spying of certain areas using pilot-less planes.

The air surrounding drones has changed quite a bit in the past few years. With their growing presence in the media, their potential is becoming recognized more and more. They can be used for reasons other than spying and warfare. People are now using drones in many awesome ways.

Regardless of how much they are being used for recreation and other purposes, the fears associated with drones are always there. This is why you must always know the proper guidelines of flying a drone in your area. Also, you should be an expert drone controller before you start sending one into the air. A small mistake could cause big accidents. With these things in mind, here are some awesome ways drones are being used today.

One of the coolest uses of drones in recent years has been for the capturing of live events. Drones are being commonly used these days to capture addresses by politicians, concerts, and live sports events. They can provide a perspective to the audience that no other technology can provide.

In the past, cameras hung from cables were used to capture aerial views. However, their use was pretty limited since they could only move on a straight cable. The drones used today are free-flying objects that can move in any direction you want.

When watching live events, you will often notice the small flying objects right in front of the stage. These are drones with 4-rotor blades carrying cameras and capturing amazing footage.

Drones have opened up such possibilities for humans that exploring the world’s deepest corners has now become a much easier job. For example, geologists have to visit the most peculiar and dangerous parts of the earth to do their jobs. Sometimes, large organizations like NASA have to rely on satellite footage to know the structure of earth in certain dangerous areas. With drones, it is now possible to have a much closer look at places that are not easily accessible for human beings. These drones can go into these places and provide footage so humans can later visit with knowledge of what to expect in these remote areas.

Drones are being used by many big companies for the delivery of products to customers. Think about pizza chains sending pizzas to their customers using drones. These drones are powerful enough to carry multiple large pizzas on them and make the delivery process much faster. Amazon has been using drones in certain regions to deliver small items. However, sending large items this way could be hazardous.

This is one of the best uses of drones, despite the many fears that people have associated with drones being used by the police. Aside from surveying areas where terrorists are hiding, drones can also be used to identify the locations of criminals and the right plan of action if criminals are holding hostages. In fact, drones used by police can also shoot if the need arises.

Most sci-fi and action movies require aerial shots. In the past, filmmakers had to use helicopters to direct aerial scenes in their movies, but hiring a helicopter and shooting on it can be annoying and expensive. With drones, you don’t have to go through that hassle or disruption. Using expert drone controllers means clean footage that is exactly what the director wants. It seems that modern cameramen and their crews will have to learn to fly drones if they want to protect their jobs in future.

6. Keeping an Eye On Wildlife

With the rising numbers of threatened and endangered wildlife populations, human interest in conservation and protection is growing. Keeping an eye on these animals is a top priority for organizations working in this field. However, when humans enter animal habitats, they can do more harm than good. There is now a better way for these organizations to keep an eye on wildlife without disturbing the peace. Drones have provided a way for these organizations to do their jobs without hurting the animals they are trying to save.